We’ve all likely heard the phrase “If you play with fire, you’re going to get burned” more than once in our lives. Most of us have probably found this to be true firsthand, whether figuratively, literally, or both. Fire can be irresistible – it’s beauty, it’s intensity, and it’s powerful ability to change or transform something immediately draw us in.

We want to touch it, to manipulate and control it, to use it as a power of our own…but we can’t, not fully. And we’ll get burned when we try because in it’s beauty, intensity, and transformative abilities, it is free and unpredictable. The essence of Fire connects us to our own inner spark, whatever we are meant to create in this world – to pull it straight from the ether, the Divine, and into this life. Throughout time people have discovered ways to harness some of Fire’s powers, and the discovery and use of fire in human history catapulted our ancestors from a lifestyle of simple survival to the iPhone 5. 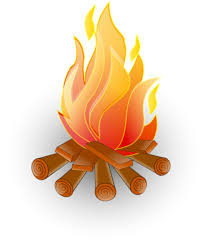 The element of Fire represents the energy of creativity, with which one is able to connect to the Divine spark within that inspires us and lends to us the intuitive knowledge we need to progress in our evolution, be it personal, communal, or universal. Fire is a masculine element, meaning it is initiating and drives energy rather than waiting for action to come to it. In Tarot, Fire is represented by Wands (Clubs in a regular deck of cards). http://www.biddytarot.com/tarot-card-meanings/minor-arcana/suit-of-wands/

Fire signs typically are quick to accept a challenge or chase and like to feel decisions are inspired and spiritually linked. Expression is founded in creativity – bringing something new into the world, whether by fighting for new ground, ruling with flair, or searching for higher truth.

Astrologically, Fire takes the form of:

Aries (ruled by Mars, cardinal quality): pioneering, the first to step forward; possessing the blind courage of the Fool; confident/egotistical, head-ruled/intellectual; natural loner; prone to violence and war lust; honest, with a strong moral code; appreciates and strives for efficiency

Sagittarius (ruled by Jupiter, mutable quality): hedonistic until disciplined; on a constant search for higher truth; world traveler and lover of foreign cultures and experiences; has the gift of prophecy; blunt with speech; both a natural student and teacher; quest-driven; natural mimic and jester

if you play with fire, you’ll get burned