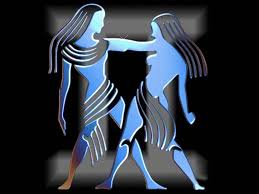 Characteristics: Geminis are the Pandora’s Box of the zodiac. You never know what you’re going to get. Usually a bunch of crazy shit flies out, but then they like to finish with a little bit of hope – you know, for humanity’s sake. They are the multi-frequency sign and have their antennae extended all the time.

Geminis are a perfect example of how any energy can go to one extreme of the spectrum or the other, from one end of the seesaw and then back across to the other end…all in about five minutes or less. And they do this constantly, with whatever energy is most handy: happy, sad, angry, giddy, persecuted, valiant, worrisome, carefree, bored, overstimulated, loving, manic, depressed, etc. They thrive on change.

Truth can be elusive for them and their silver tongue is continually in danger of being tarnished. They have a predisposition for gossip and manipulation and, as natural actors, the less evolved among them are known to use emotions to get what they want – a pattern possibly so ingrained that others don’t even notice it.

Geminis gifts include communication and versatility; they can adapt quickly and easily and are able to access a berth of creativity and information known to no other sign. They are expert at growing life from an early stage – the germination period – that will one day reach fruition, but it’s highly unlikely they’ll be around to see things through.

Their challenges include learning to stick with one thing long enough to develop it fully, feeling an emotion more deeply than on an exploratory level, and managing their level of distraction, which is considerably high. They want their next “fix” of stimulation or interest and are often addicted to technology or some form of communication, like talking, listening to or playing music, having a tv or radio on all the time, or Facebook – all in effort to cover up the noise in their own heads.

Just like their minds are constantly on the move, their bodies often are, too. They typically travel frequently but tend to stick to shorter distances from home over world travel. They often have a youthful appearance through life and love caring for small animals and pets.

If a Gemini learns to focus and let go of worry and distraction, they are able to, like Hermes (Mercury, their ruling planet), become messengers for the gods, conduits through their higher selves of some form of the arts. With a mind cleared from noise they can also access higher dimensions and relay prophetic information. When Geminis are really on their game, they can translate any emotion – not as part of themselves – but as the communication with our higher selves that emotions are meant to be.

But this takes a lot for Geminis because their devil is distraction. They must learn to be directed from Spirit rather than their environment. Being able to hone their focus can take them from ungrounded, always worried, and pulled in too many directions to the fast track of success.

CBD on the cannabis and prosperity