When looking at a chart, you’ll notice there are twelve divisions around the circle that are shaped like slices of pie. 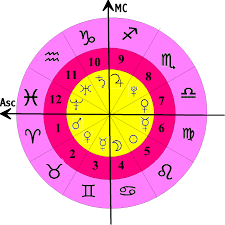 These are the Houses, and each one represents a different area of life. Each house also comes with inherent energy based on an association with a constellation, or zodiac sign. They are numbered 1-12 beginning with the slice on the left just below the halfway mark horizontally, and the numbers go counterclockwise around the circle (based on the rotation of Earth).

Here’s the lowdown on them:

First House: Naturally ruled by Aries and the planet Mars, the first house is “all about you”. It tells you what is relevant to your ego and sense of self in life and how you interact with the immediate world around you. It also indicates how you look physically.

Your Ascendant (Rising Sign, AC) is part of the first house, as well, dividing the first house from the twelfth house. Your Ascendant is the constellation that was rising on the Earth’s horizon at the time of your birth and is shown as the left end of the horizontal line across the circle. It indicates your “face to the world” and how others perceive you.

Second House: Naturally ruled by Taurus and the planet Venus, the second house is what you value in life, be it tangible or intangible. It governs money, possessions, self-worth, and your experience with the sensual things in life.

Third House: Naturally ruled by Gemini and the planet Mercury, the third house is about how you communicate, your immediate surroundings, your siblings, and your childhood. This house details how you form your thoughts – how your mind works on it’s basic levels – and the ways you choose to communicate. It also governs short-distance traveling.

Fourth House: Naturally ruled by Cancer and the Moon, the fourth house tells about your home, both the physical one you live in and the sense of it you carry inside. It represents your psychological roots and foundations, most often built by your mother or mother figure, your sense of security in life, your connections to the past, and real estate.

The Immum Coeli (IC) – the line dividing the third and fourth houses – is the cusp of the fourth house. It represents your inner world psychologically.

Fifth House: Naturally ruled by Leo and the Sun, the fifth house tells you how you like to play, how you have fun and shine. It is the house of creativity, so it also tells you about your connection (or lack of ) with children and how you express yourself creatively. The fifth house indicates how dramatic and romantic you are, as well.

Sixth House: Naturally ruled by Virgo and the planet Mercury, the sixth house tells you about your work habits and techniques, what your daily routine may look like, and about your health and nutrition habits.

Seventh House: Naturally ruled by Libra and the planet Venus, the seventh house is about partnerships in life, including both business associations and marriages and any legal affairs or contracts involved. It also clues us in to our “shadow selves” or alter egos, being directly opposite the Ascendant and first house.

The Descendant (DSC or DC) represents who we might be attracted to, what energy we need to find balance with in life, and what our past lives may have included.

Eighth House: Naturally ruled by Scorpio and the planet Pluto (yes, I said planet; deal with it

), the eighth house shows how you handle the process of death, transformation, and rebirth. It’s also linked to your handling of other people’s money (sometimes in the form of inheritances), sexuality, crises, taxes, and addictions.

Ninth House: Naturally ruled by Sagittarius and the planet Jupiter, the ninth house describes your interest in higher learning and education, foreign cultures and travel, your ethical standards, your sense of adventure, publishing, and your take on religion.

The Midheaven (MC) runs along the ninth/tenth house cusp and represents your public standing and face to the world.

Eleventh House: Naturally ruled by Aquarius and the planet Uranus, the eleventh house reveals your highest hopes and dreams for the world. It shows how altruistic and humanitarian you are, and also describes how you are with friends, organizations, and groups. It illustrates your inventiveness, level of rebellion, and appreciation of the odd.

Twelfth House: Naturally ruled by Pisces and the planet Neptune, the twelfth house represents your karma. At the end of the zodiac cycle, it shows your ability to commune once again with the divine and what you keep buried in your subconscious. It shows what you hide, your involvement with any institutions, and your weak spots that will lead to your soul’s growth.

If you’re interested in diving deeper into these, here are a couple of websites to check out: